There were areas in this city that for the storm that made worldwide notoriety,
flooded 400K plus people…..KATRINA

In a city run by democrats since the dawn of time….

When the levees failed and the Gulf of Mexico pushed by the Atlantic ocean rushed into the city these areas WERE NOT FLOODED…because they were higher than sea level and the rain and floodwaters did nothing to them….

So let’s reiterate when the levees that flooded New Orleans broke in two separate areas, the city flooded by both Lake Pontchartrain and the Gulf, except for those along the downtown river area, some of the uptown areas and the french quarter every homeowner, except for those on the natural ridges of high ground which DID NOT FLOOD, Flooded with 8 to 11 inches of rain…or supposedly 8 to 11 inches of rain?

Now the city political hacks will tell you one excuse after another…No pumps could remove such water…8 to 11 inches…yet the whole gulf rolled in, along with the rain that fell and did not flood the areas that were flooded on 7/10/2019……..WHY?  We pay tons of taxes we pay exorbitant water bills for sewerage or is it sewage and drainage, for the upkeep of pumps etc..etc…

But as usual, democrats miss the mark and …. 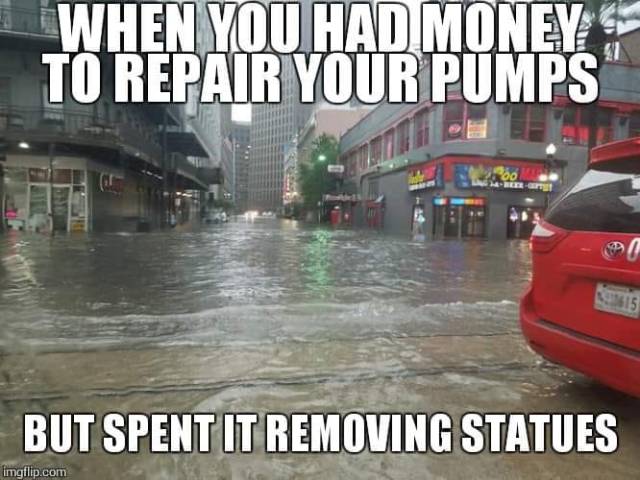